That moment when you realize that you’ve been grazing in theological pastures that have been “gmo’d” with ancient near eastern paradigms that have been cultivated for at least two hundred years. Your “ears” should have started tingling when you heard that “every thing you ever learned about God was wrong.”

From there you will hear that, “since the Bible was not written to you,” you therefore need the expertise of a “Priestly Class” who will show you what controlling interpretive filters you should adopt to understand the New Testament and the Old Testament.

Knowing that the world has been populated with the writings of those who believe that, comparatively speaking, all the major ancient world religions share a common locus of truths that had the same source, should help you to be a bit more discriminating in adopting paradigms that start with “even the way you have been taught to think is wrong.” 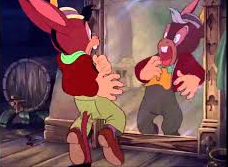